Sinead McSweeney: Push beyond your comfort zone to take the next step 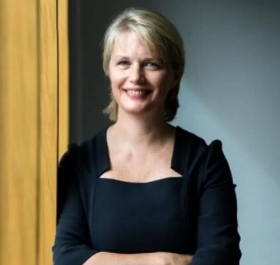 Sinead McSweeney: Push beyond your comfort zone to take the next step

The MD of Twitter Ireland shared her insights on a multitude of topics in a special session with the IMI.

Standing up to bias and your ‘role in the room’

Sinead spoke candidly about her experiences working across male-dominated sectors such as politics and policing, acknowledging that despite clear progress over the years there are still challenges to be overcome. She explained that at times there is an assumption of what your ‘role in the room’ is, and that this can affect both men and women. She encouraged people to be more aware of that unconscious bias. Speaking directly to women, she explained that at times they create their own unconscious bias about roles. She encouraged them to ‘lean out’ and move towards a more shared approach to roles, whether it is as a carer for children, older parents or something else entirely.

Women can be guilty of limiting themselves and not seizing upon those ‘catapult’ moments in their career, Sinead said. She went on to say that this happens at various stages of women’s careers, notably when assessing their suitability for roles. Men, she pointed out, often mentally tick off the requirements of the job description, at times ‘winging it’ on certain qualifications. Women, meanwhile, have a tendency to say ‘I can’t apply’. She emphasised that slaying your ‘internal demons’ and having people who are there to push you are crucial to escaping this cycle of self-doubt.

“I’ve had so many young women almost apologising for making the decision to have a baby or having an extended maternity leave. Why apologise?”

Mentors and pushing beyond your comfort zone

Referencing her experience to date, Sinead said that if women could focus on the key skills and experiences they possess, and not dwell on those they do not, they could break down mental barriers to progress. Having not only a mentor, but having a variety of different types of mentors, is critical to get the best of the experience and to make a lasting impact. She said there was as much to learn being a mentor as there was being a mentee. Often, she said, these experiences forced her to look beyond her comfort zone and to take the next step that she had not contemplated before.

Women live their lives in phases

Drawing a quote from the first female US Secretary of State, Madeleine Albright, Sinead noted that women live their lives in phases. She insisted that women need to move away from this ‘fast-paced’ idea of what a career is. It is perfectly acceptable, she said, to have phases where you are making progress and doing good work, but you’re not ‘full on the accelerator’. She mentioned that careers can have peaks and plateau phases and that women shouldn’t be apologising for taking the time out to rear their children or to care for an elderly parent. A more balanced approach was needed, she emphasised, but that it wouldn’t ‘happen overnight’.

“Different people over the years have had an impact on me and enabled me to see that there was a next step that maybe I hadn’t seen.”

A rigid career path is not for everyone

Sinead spoke to the idea of a career path and admitted that it was not something that she subscribed to, preferring instead to wait for exciting opportunities and strike when the moment was right. She acknowledged the approach was not for everybody, but that it had served her well throughout a varied career. That sense of ‘variety and newness’, she said, was what kept her engaged.

Be a critical thinker

Adopting a critical mindset, interrogating concepts and ideas, and not accepting things at face value: these are things that should be integrated into our thought processes, Sinead said. Cautioning that it should not be done to the ‘point of distraction’, she said that this approach should be taken with the view that you should ‘seek to understand, not seek to be understood’ in communication with colleagues. This type of mindset is a powerful tool, she said.

IMI Leadership Webinar: Managing in the Age of Complexity – Lessons from a Children’s Fairy Tale with Larry Stapleton
Events, Webinar