Author and highly acclaimed speaker in the field of high performance.

Karim Lakhani: Competing in the Age of AI
Whitney Johnson: How To Grow Resilient Leaders 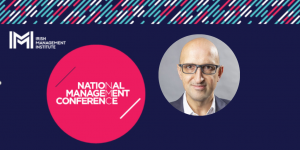 There is an intimate link between cognitive diversity – the ability to think differently about the world around us – and the growth mindset. It is instrumental in shaping a high-performance culture. In a fixed mindset, the danger is that we become preoccupied with this nebulous idea of ‘talent’ and the aptitude of the people in the organisation. We fall victim to the old adage that ‘success emerges from talent’.

However, the fragility of this fixed mindset around talent is exposed when we are confronted by more dynamic and complex business realities. It is how we deploy the unique talents we have that can make the difference.

“Talent is a real phenomenon and if you can identify it, it makes sense to hire for it,” said Matthew. “In a growth mindset, however, while it is a factor, in a complex, rapidly changing world it isn’t enough. It’s what we do with our talents that really matters – individually and collectively.”

2. Turn from a know-it-all to a learn-it-all

In a growth mindset, we can develop the ability to anticipate future disruptions, improve our collaboration with peers and become better at learning from our successes and failures.

One organisation that took this idea and parlayed it into one of the definitive modern business turnarounds is Microsoft. In its 40-plus year history, Microsoft had two chief executives – Bill Gates and Steve Ballmer. Then, in 2014, Satya Nadella took over and pivoted the business’ priorities, increasing the market capitalisation by between 1.1 and 1.2 trillion dollars.

When he assumed the role of CEO, Nadella stated that his number one objective was to change the culture from a fixed mindset to a growth mindset, citing complacency and calling the organisation one of ‘know-it-alls’.

Nadella prioritised a transformation from a culture of know-it-alls to one of ‘learn-it-alls’. Suddenly, the negative feedback of a customer became the seed for a new, innovative idea. Siloes between teams broke down, opening up problem-solving capabilities.

In a fixed mindset, we shy away from new ideas. It is an approach that undermines our ability to create solutions for a world of increasingly complex problems. If we have the cultural backing to make change happen, it can be rapid and powerful.

“Culture can sometimes sound nebulous, but it is a cutting-edge organisational asset,” said Matthew. “The culture is curated by the leaders of the company. Strategy is a good thing, but without a culture it will never really have life.”

When we talk about diversity, the first thing that inevitably comes to mind for leaders is demographic diversity – people who come from different backgrounds and cultures.

There are occasions when having too much of cognitive or demographic diversity does not make sense. For example, if I were putting together an advertising campaign to target a wide variety of demographic backgrounds, it would be counterproductive to create a team of a homogeneous background. This would narrow our capacity to connect to customers.

I sit on a committee that advises the England football manager Gareth Southgate. What has fascinated me is that this advisory group is completely optimised for cognitive diversity, with knowledgeable people from diverse backgrounds pooling their knowledge. This leads to divergent thinking and a big uplift in the collective intelligence of the group.

As leaders and human beings, we are naturally drawn to people who think like us. It makes us feel smarter. In a fixed mindset, you want to be surrounded by like-minded individuals. If they tell you what you already know, it validates your knowledge.

However, once a problem reaches a level of complexity, you need many minds working together to get to better solution as a collective.

“Reducing diversity to demographic box-ticking exercise misses a great deal of its power and meaning as a way of solving difficult problems and coming up with standout innovations,” said Matthew.

Crucially, however, cognitive diversity is not a one-size-fits-all solution and must be catered to the specific organisational context. One organisation that maximised this was Bletchley Park, the main centre for the Allies’ code-breaking operations during the Second World War. This rural location was where a collection of great minds came together to crack the Enigma code, an achievement widely credited with shortening the war.

What they realised was that hiring the greatest mathematicians and number-crunchers wasn’t enough. Bletchley Park were early adopters of cognitive diversity, realising that even a team of the finest mathematicians alive, as brilliant as they might be, lacked the capacity to do what they needed to do. They also hired philosophers, linguists and ethnographers, and women represented more than half of the people who worked there.

The result was a leap of insights and a pivotal breakthrough.

The capacity of organisations is a function of the individual brilliance of their people and their collective diversity.

“If people think the same way and come up with the same basic ideas, you get the same results,” said Matthew. “In truth, you can have two teams of equal individual ability where the diverse team is almost 1000% more creative.”

What organisations like Amazon, Google, Microsoft, Pfizer and AstraZeneca have focused on during the pandemic is creating the cultural conditions to enable diversity to flourish. They are empowering ‘learn-it-all’ people to work together to react to client needs – and to proactively shape them as well.

There is a temptation to follow along with what some call the HPPO (Highest Paid Person’s Opinion). For example, the leader offers an opinion and everyone unconsciously gravitates towards that position. They want to flatter the leader, but this can be very dangerous. What organisations should do is promote an open exchange of views, giving the leader access to better information.

“The best organisations are pivoting to a growth mindset linked to cognitive diversity, which is precision engineered to maximise the collective intelligence of groups in the context in which they find themselves. When organisations get this right, they have an asset that is truly priceless.”